There was a Black Country man who could curse for half an hour without drawing breath or repeating himself.
One day he misjudged his aim and gave his thumb a good wallop with his hammer. His workmates paused in their own work and waited with interest. He said, "Oh -- faddle!"
His workmates stared. Then one said,
"Tha coo-ert cuss as tha couldst cuss, cost?"

This tongue-twister is an old Black Country story, handed down to me. An heirloom story. The final line is, of course, in Black Country dialect and translates as:

"Thou canst not curse as thou couldst curse, canst thou?"

In translation, it becomes quite Shakespearean. As, of course, it is, since the Black Country dialect, like many other despised English dialects, preserves a lot of older English.

What has this to do with the Sterkarms?
Well, one of the things I've been doing as I've rewritten the Sterkarms over the past year, is to make the Sterkarm's speech more archaic. So I've been grappling with one of the big, perennial problems of writing historical fiction. How do you represent the speech of historical characters?

One school of thought is that you have your characters speak in modern English because the people of the past didn't think of themselves as being 'historical.' They were right up to the minute fashionistas, and they spoke right-up-to-the-minute Latin, or Aramaic, or Anglo-Norman or whatever.

I have a lot of sympathy with that point of view. It was handled superbly in Alan Garner's Red Shift, where one section opens with a conversation between, at first glance, American GIs during the Vietnam War. Only gradually do we realise that they are, in fact, Roman legionaries stranded 'behind the lines' in darkest Celtic Britain.
After all, the legionaires would have had their own slang, the equivalent of that used by soldiers in later wars. I read somewhere that a lot of our 'classical' Latin is, in fact, slang, that 'caput' actually means, not 'head' but the stopper for a jar. How true this is, I can't say, being no linguist, but it's an interesting idea. The slang of one period becomes the revered classical prose of another. At sometime in the future, 'Hey dude, wassup?' will be heard or read as, 'Dear sir, respectful greetings.'

So I could have made the Sterkarms talk in modern English -- except that, in these books, 21st Century characters and 16th Century characters are together in the same time and space, via a time-machine.
I used to love the old SF series, The Time Tunnel. I've always loved the fantasy of being able to visit other times and experience what life was like then. But even as a child, it irritated me that wherever our time-travellers stepped out of their machine -- whether it was Ancient Greece or Revolutionary France -- they could instantly understand the locals, and the locals them. Perhaps the

series came up with some explanation, similar to Douglas Adam's brilliant 'babel fish,' but if it did, I missed it.
I was determined not to make that mistake when I wrote the Sterkarms, and made it very clear that the Sterkarm's speech is not immediately understandable to their 21st Century visitors, nor vice-versa.

“Day glayder migh a finner thu!”
It gladdens me to find thee!

When I wrote the first book, The Sterkarm Handshake, I kept to the rule that the Sterkarms spoke in their own dialect, or in a somewhat archaic style, if they were in the company of 21st Century people. But if they were talking among themselves, or with Andrea, who understood them, then I gave their words in modern English.
Then I wrote the third book, A Sterkarm Tryst.  Most of the action takes place in the 16th Century, but there are plenty of 21st Century people (or 'Elves') milling around there. Or then. I needed to make the distinction between the Sterkarm's speech and the 'Elves'' speech clearer. And if I was going to do that in the third book, then the first two should match. So I rewrote them. 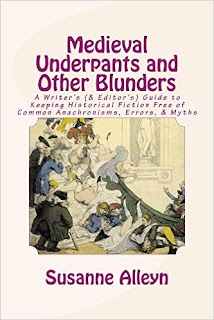 In 'Medieval Underpants and Other Blunders' Susanne Alleyn warns historical writers against attempting 'theeing and thouing.' It is not as simple, she rightly says, as replacing 'you' with 'thou' or 'thee.' And 'thou' and 'thee' aren't interchangeable.
She's quite right. The distinction between 'you' and 'thou' is one reason I wanted to use it, because it's a distinction between formal and informal speech which has vanished from modern English, but was very much a part of the Sterkarms' world.
'Thou' and 'thee' could be used when speaking affectionately to close friends or family, which is why it has become associated with lovers' rhymes, but also when speaking to social inferiors. The meaning here would depend on context. Its use could say, "I know you and trust you well, I regard you as one of my family." Or it could say, "You are so inferior to me that I don't need to bother being polite."
'You' was used to superiors and to strangers who seemed to be of equal or superior status. As you came to know someone and were friendlier, a point was eventually reached where one person, usually the older, asked, "Shall we be 'thou' to one another?"
'You' could also be used in situations where you might actually know the person you were speaking to very well, but wanted to emphasise formality -- for instance, to transpose this into today's world, two teachers who were actually good friends might address each other as 'you' in front of a class.
And 'you' could also be used as a weapon against friends, family and lovers. A sudden switch from 'thou' to 'you' signalled that not all was well and the speaker had taken it up the nose.
Indeed, I'm quite sorry that we've lost the you/thou distinction.

I still haven't explained what has all this to do with, 'Thou coo-ert cuss as tha couldst cuss, cost?'
It's simply this: I like to feel I'm standing on firm ground when I attempt something like this. How to avoid the quagmires of using 'thou' when it should be 'thee'? How to feel confident when writing it? I think a loss of confidence in a writer always shows up in the prose.
Well, my firm ground is simply this: I'm Black Country born and bred. I grew up using such words as 'malkin' (simpleton) and 'gleed' (hot coal) and pronouncing 'laugh' as Shakespeare did -- as 'loff.'

Another old story. The first time a Black Country boy ever saw a (steam)-train go by, he ran screaming to his mother. "Row of housen went past like lightening and fust un's chimney was a-fire!" This boy would have worn 'shoo-en' on his feet. It's the old English plural: instead of adding 's', you added 'en.' The Laland Scots 'een' for 'eyes' has the same plural.

I grew up familiar with 'thou' and 'thee' too. Many of my grandparents' generation still used it, and certainly my great-grandparents' generation did.
My parents didn't use 'thee' and 'thou' much themselves. It had been firmly labelled 'old-fashioned' and 'uncouth' by their day. But, when telling stories of their families and joking about 'th'owd uns' they would use the form.

And he said, "Hey! Thee! Tha'd stand coal cracking on tha yed, thee!"
And her said, 'That frock'd fit Barnum'n'Bostock's elephant. It'd just do for thee, May.'

And, 'Tha coo-ert cuss as tha couldst cuss, cost?' The phrase was preserved for the pleasure of saying it and for challenging others to say it and understand it.
All this was steadying as I tried to find a way for the Sterkarms to speak. I never felt I was being twee or striving for effect -- After all, if beauty is in the eye of the beholder, then archaisms are in the ear of the listener and, to me, many 'quaint, archaic' phrases are simply ordinary, everyday speech.
"Ar," for 'yes' is not stage country-bumpkin but what many people I know would reply to a question. Myself included.
There's nothing 'Carry-On' or facetious about the word, 'wench.' It's the usual Black Country word for 'girl' or 'young woman' and 'our wench' means 'my sister.'
I was only trying to make the Sterkarms spake like th'owd uns.