How To Be Free

Be merry. Be free.

This sentiment appears on the cover of How To Be Free and runs throughout the book.
It's a most entertaining read. Half the time I agreed with  Hodgkinson's arguments so wholeheartedly, I wanted to cheer. The rest of the time I thought them so crack-brained, I wanted to throw the book across the room. I always enjoy books like this. They make you think.
Tom Hodgkinson is the editor of The Idler and the author of How To Be Idle. From page one to the end, he rages against the 'mind-forged manacles' that keep people in jobs they hate in order to pay, often, for things they don't need or even really want. They just think they ought  to want them. (In his opinion.)
Modern society, he argues, is in all but name, a slave society, but the chains are all 'mind-forged.' It forces people into a rigid system. First it educates them to believe in passing exams and 'getting a good job.' But a 'career' Hodgkinson argues, sets meaningless goals of 'sales targets', 'bonuses' and 'promotion.' People are convinced that a bigger house in a 'better' neighbourhood, a more expensive car, 'designer' clothes and kitchen gadgets are signs of success and, therefore, happiness. But none of these things are, fundamentally, what make people happy.
And, of course, in our present society it's impossible for everyone to have a high-flying career. Some simply aren't interested and they're called stupid, feckless, unambitious and lazy. Others are broken by the stultifying demands of 'career' and many are suddenly made redundant by economic shifts they have no control over. These people are labelled 'failures,' which does its own psychological damage.
The whole notion of 'a good job' and 'a career' are, Hodgkinson says, traps and enslavements. The things that make human beings happy are: friends and family, having a laugh with them, creativity, control over your own life, growing things and tending animals, and having plenty of time to be idle and think.
The book is a series of 29 short essays, all ending with a rousing slogan. Among them are:-
It's all energetically, playfully and wittily written, but Hodgkinson really means it. Every chapter has its own note at the end, giving hints on how you might practically follow up the advice.
As a grumpy old Leftie, I muttered and mumbled about public-school educated Poshos telling the rest of us how to live -- haven't we had a gut-full of that, for gods' sake? And it's all right for some with their Trust Funds and the Bank of Mummy and Daddy to fall back on...

But then I had to admit that, for most of my life, I've followed most of what Hodgkinson suggests.   I am, I suppose, what he likes to call 'a Bohemian.' Indeed, a rather hard Glaswegian of my acquaintance nicknamed me and Davy 'The Brummie Bohemians' when he learned that, not only weren't we married, but we had no intention of ever getting married. (I was only surprised that this friend thought it worth commenting on at all.)
I didn't plan to be a Bohemian -- but then, I've never gone in for life-plans or even five-year-plans. They strike me as very odd. How can you plan for five years ahead when you have no idea how you or your circumstances will have changed?   I had no idea that by being planless, I was 'stepping outside the system' or being free.   Mostly, I thought I was being broke, but apparently being broke is the new rich.
I've never had 'a career' or wanted one. (My writing is sometimes called 'a career' but, well, hardly.) I've lived from advance to lecture-fee to royalty. I am very frugal and thrifty (some would say stingy.) I will spend money, if I have to, on things I really want -- books, travel, plants. Everything else is cheap or second-hand and never replaced until there's not another day's use in it.  Because what I don't spend on non-essentials I can put towards stuff I'll enjoy.  Of course, what's 'essential' is open to definition.  Fashionable clothes and house redecoration are, for me, non-essential in the extreme whereas books, single malt whisky and trips to the Hebrides...
I've always had plenty of time to be idle, to read, to think, to write, draw, learn, make... It's also true that I've rarely felt such satisfaction as I have with my recent (and on-going) creation of a wildlife garden combined with growing my own fruit and vegetables. Hodgkinson is a hugely enthusiastic gardener and wants everyone to garden -- and I have to agree with him about gardening as a source of happiness. So. on some things I find myself in complete agreement with this book. And then, on other things, not.

Hodgkinson blames the sorry state of slavery that exists today on 'Puritans.'  He really hates 'Puritans.'
In the good old, Catholic Middle Ages, according to him, we all lived in a demi-paradise. We each of us had our cosy little cottage with a small-holding and all we had to do in return for it was a couple of days' light work a week on the lord's land -- and, of course, as we all worked together, there was lots of good fellowship and cheer and it wasn't like work at all really.
The rest of the time we could work at our own pace on our own business, growing our own food or working, with creativity and satisfaction, at some useful craft like blacksmithing, pottery or basket-making. (All working-class crafts, which workers had no choice but to do, all recently taken up as 'artisan jobs' by the middle-classes like Hodgkinson. Excuse my grump. My great-grandfather was a blacksmith: my grandfather was a brick-maker. Neither did the work in order to be happy. Neither had much choice about it.)

The Catholic Church was a benevolent overseer to this golden Merry England, providing lots of gorgeous ritual, music and holidays to lighten our days. Life was just wonderful all the time.
But then came the Reformation and the rise of Capitalism. The Catholic church and all the monasteries were destroyed. The peasants' common land was stolen from them and enclosed for the rearing of sheep. Families who'd been comfortably self-sufficient became hired farm hands in tied cottages. Land began to be something the rich speculated in to make fortunes, rather than something used by and for the whole community, to raise food.

Things just got worse and worse with the rise of industry and the dark, satanic mills. Workers became dispossessed 'hands' and 'mechanics', forced to work miserably in terrible conditions, for inhumanly long hours, for a pittance. The medieval guilds where masters and men worked together vanished, and Unions were formed from the workers' desperation. Ever since then, workers and employers have been at loggerheads, one side for ever trying on some chicanery in order to make more profit and the other side forever on the defensive, trying to claw out some quality of life from the hellish urban landscape.

It all reminds me of 1066 and All That, where the Cavaliers are summed up as 'Wrong but Wromantic,' and the Roundheads as 'Right but Repulsive.' (The beautiful drawing is by John Reynolds.)

I recognise that there are some grains of truth in Hodgkinson's account. The idea that all peasants, throughout the entire 400 years or so that make up 'the Middle Ages' were all plague-ridden, shit-encrusted and starving all the time is a nonsense.  Excavations have revealed that many 'peasants' lived comfortable and prosperous lives. They did have more public holidays than we do and they could work as hard or as lightly as they chose, just as workers in the later cottage-industries could.  As Marx put it, before the Industrial Revolution, work was a part of life. After, work was a sacrifice of life.  (But did medieval peasants think that on a freezing cold morning when they had to go out and plough?)
The medieval Catholic Church often did serve a benevolent social role, providing work for makers of beautiful things, giving alms, keeping guest houses for travellers and taking the sick into its care.
But, but... I can't help feeling that Hodgkinson's view of the Middle Ages is seen not so much through rose-tinted specs as a shocking-pink blindfold. The Catholic Church was often anything but benevolent -- the Inquisition? The witch-hunts? The Crusades? The slaughter of the Cathars? Where do these things fit into the happy, singy-dancy medieval dream?
And that cosy medieval world of Hodgkinson's, where everybody loves everybody else and they're always singing and dancing and feasting? Were there never any cold winters or hungry gaps? -- How about this, from Piers Plowman, by Langland, who was actually present at the time, 600 years ago?

“As I went on my way,
I saw a poor man over the plough bending. 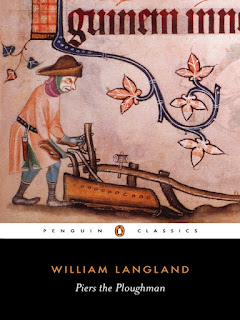 His hood was full of holes,
And his hair stuck out.
His shoes were patched,
His toes peeped out as he the ground trod.
His wife walked by him
In a skirt cut full and high,
Wrapped in a sheet to keep her from the weather,
Bare foot on the bare ice
So that the blood flowed.
At the field’s end lay a little bowl,
And in there lay a little child wrapped in rags
And two more of two years old upon another side.
And all of them sang a song
That was sorrowful to hear.
They all cried a cry,
A sorrowful note.
And the poor man sighed sore and said
“Children be still.”


And with all Hodgkinson's railing against 'slavery' I was a little taken aback at his description of the American Civil War as one fought between the 'rude North and the courteous South.' He doesn't mention that one of the South's 'courteousies' was the enslavement and mistreatment of other human beings. I'll take the grasping North's rudeness, thanks, over that kind of 'courtesy.' It was this kind of thing which enraged me and made me throw the book aside.
Even so, I picked it up again. I can't help agreeing with Hodgkinson more often than I disagree with him. I think he is often silly,  but still has the big picture of our society and how it needs to change, framed about right.
I recommend the book as a stimulating, entertaining and, perhaps, even world-changing read.