The Joy of Notebooks 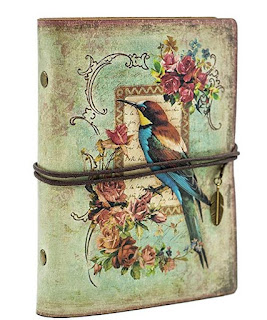 Earlier this month my Authors Electric colleague, Lynne Garner,asked us what we like to write with.


She mentioned that she had 'many, many notebooks' which she preferred to use when writing poetry. A writer she said, could not have too many notebooks, especially if they were lovely.

Lynne is far from alone in thinking this. Over the years, I've heard dozens of writers sing the praises of their notebooks: the moleskin ones, the leather bound ones, the ones with lovely floral or shiny covers. I've heard many writers say that they keep special notebooks to write down ideas in, and many say that they can't start a new book until they find that special notebook which is just perfect for that particular idea.

This all makes me feel quite left out as in my entire writing career of nearly fifty years I have never, ever given a single spit about any notebook. I buy 'em cheap, treat 'em mean and discard 'em without a thought.

I'm not trying to say that I am right in this and everyone else is wrong -- not at all.

I've always thought that writers should adopt whatever method helps them to get the words written (short of GBH or murder.) And if beautiful notebooks do it for you, then stack them high. Put aside money to buy them. If you need a particuarly beautiful notebook in order to get the idea down on paper, then you need it and there's nothing more to be said.

But I feel there may be those like me who, indifferent to the allure of notebooks, are asking themselves: Can I really be a writer at all, if I don't have a notebook habit?

I want to reach out to those writers and assure them that, yes, there is writing without beautiful notebooks.

I have what I think many would feel is a depressingly pragmatic approach to writing, as to most other things in life. Easy and cheap, that's all I ask.

I used to write by hand a lot before PCs happened. Not because of any spiritual feeling of closer contact with the ideas that flow from my heart to my hand (as I've heard some writers put it.) No: it was simply that it was slightly easier than using a big, heavy, clumsy typewriter.

I used to write so much, for so long that I had the most impressive writers' cramp I've ever seen. Not just an achy hand -- not just a trembling hand. My right hand used to go into such violent spasms that it jerked up as high as my shoulder and threw the pen across the room. Which is one way of saying: I've had enough!

That's when I found that I could write almost as well with my left hand as with my right, especially if I turned the paper sideways (a tip from my left-handed aunt.) Not as legibly, but good enough. Several members of my family are left-handed but I'd never had a problem with using my right and had never tried writing left-handed until I wore my right hand out.

For a while I wrote with a typewriter. I never liked it much, but the electric one made it slightly quicker and easier than writing by hand, most of the time. As soon as I could get a computer, I started writing directly onto a computer almost all the time: rough drafts, rewrites, fiction, non-fiction, it doesn't matter. Because it's easier. That's the whole of it. No matter how beautiful the notebook is, I can't grab a whole paragraph and shift it to elsewhere on the page, as I can with a computer. I can't over-write in a notebook. I can't easily add a lot of notes to the end of a day's writing, in different colours and fonts -- and then, next day, shift them around until I decide on the strongest and then over-write them.

I do sometimes do a pubowrimo -- that is, when I'm not getting any writing done, I take a notepad and pen to a pub and write there. But it's the change of scene that's important, the break in routine, not the notepad.

I always use the biggest, cheapest writing pads I can find. And I write from margin to margin, side to side and top to bottom. I think this comes from having been raised in a household where money was scarce, but almost everyone drew and wrote. Drawing and writing pads were jealously guarded and often hidden (since an artist will scribble sketches on the nearest available paper. You have to watch artists.) When I write in a notepad, the idea of leaving wide margins or blank pages to add revisions is against every instinct I learned as a child.

While writing on holiday, I have used notepads, simply because it's more convenient than lugging some electronic device around. I've gone to the local store on some small Hebridean or Greek island  and bought the cheapest writing pad they have, of whatever kind -- school exercise types or 'reporter' notebooks. I scribble in it, type up what I've written when I get home, and probably never look at the writing pad again. (Except I am currently using an old reporter type to do hard sums in as I work through Mathematics: A Complete Introduction. I decided to stop being 'bad at maths.' (Or, at least, not as bad.)

I've never kept a notepad of ideas because I know that I would never look back at what I'd written. I've always believed that, if I have a good idea, I'll remember it. I may forget it for a while, but it will eventually come back, bringing friends with it. I think a notepad -- even if I looked at it often, which I wouldn't -- would tend to fix the idea as a first thought, whereas I want it to stay fluid. This may not be the case with others but I know all too well how literal and single-tracked my mind can be. I don't need to encourage that tendency.

As for finding a new, lovely notebook for every new book I write... Nah. I dither about starting something new as much as anyone. I may even do a pubowrimo to get into it. But the pad I write in will be some big, lined, supermarket cheapie. Probably one I've already scribbled other stuff into.

There is no romanticism in my writing soul. I once amused my editor at Faber, Phyllis Hunt, when she asked me if I was writing anything. I said I had 'a couple of things up on the stocks.' "Oh, they're boats?" she said.

I thought about it and said, "They're something that I'm hammering together out of bits of old orange crates and scrap." I admit, it does faintly annoy me when writers (such as Dickens) compare their books to babies or children. I hammer my stuff together. I tear it down and rebuild it. I clear the site and make good. Children aren't allowed on building sites. I've no doubt that this 'hard-hatted worker on a building site' metaphor is found intensely annoying and posey by many, but for me, it chimes better with my attitude to my work. I don't wipe my stories' noses.

I don't care much about the paper, but difficult pens infuriate me. Lynne said she dislikes biros and fountain pens, and I agree. Both were banes of my school days. Fountain pens, as Lynne observes, spread ink everywhere except where you wanted it.  Biros were uncomfortable to hold and their ink was always turning sticky and blobby, making writing difficult.

My pen has to be a roller-ball and not just any one. It has to move fast and freely over the paper, in the right or left hand. Not all 'rollerball' pens are made equal. Some catch and scratch and they are quickly discarded. The ones I'm using at the moment are called 'uniball vision elite' and they're very smooth, fast and scribbly.

Just as in my childhood, I find I have to hide good pens. I am beseiged by artists and crossword and sudoki addicts. If I don't hide my best pens and deny that I have them, they are filched to make quick sketches or fill in 3 Down. I will never see that pen again. I've learned, if asked to lend them that pen I was using earlier, to say that I lost it, left it in the cafe, dropped it overboard in the Pentland Firth. Or, cunningly, to have an inferior biro to hand that I can lend them.

If there's a moral to this blog, it's simply that you can be a writer without adding beautiful, expensive notebooks to your shopping list -- although if they seem to help you write, then fill your trolley.

But fast, scribbly pens are essential.

You should always have a few packets of such pens hidden about the place. Never tell an artist or a sudoku addict where they are. Artists and sudoku addicts have no morals when it comes to paper and pens. They will take your last notebook and -- far worse -- your last pen.