"The Devil stood on Dudley's keep
And far about Him gazed,
And said, 'I never more shall feel
At Hell's fierce flames amazed."
If I look across the valley from my house, I can see Dudley Castle on the opposite hill.
A former owner, John Dudley, was executed for trying to put Lady Jane Grey on the throne and as a child I used to be told that it was 'one of the ruins that Cromwell knocked about a bit.'  Parliament's guns were set up where the present day Castlegate roundabout is, just by the 24-hour Tesco's. (It's a long way from the castle and gives you an idea of just how big a castle's outer baileys were.)
But the rhyme above refers to the period when industry came to the Black Country, the period from, roughly, 1760 to 1860: the Industrial Revolution.
My Scottish partner has just told me, flatly, that 'nobody knows where the "Black Country" is.'  So I'll tell you. It isn't Birmingham. That overgrown village with too high an opinion of itself is to the south-east.

The Black Country was an area of small towns and villages until Industry arrived -- and Industry arrived because of the district's geology. Dudley Castle is built of limestone and the 'Seven Sisters' caverns beneath it are quarried from limestone. Where the Black Country isn't limestone, it's basalt, streaked with rust from the iron in it. Alongside enormous quarries there were enormous 'marl-holes': holes from which marl, or clay had been dug. And through the Black Country ran the massive thirty-foot coal seam. It was said to be the only place in the world where ladders were needed to cut coal.

Clay to make bricks to build factories; iron-ore for smelting iron; limestone to act as a flux for the iron; and coal to fire the furnaces. All of it within a small region which meant little time and energy would be spent hauling raw materials over roads little better than dirt tracks. Once canals were dug -- and the Black Country has many 'cuts' or canals -- the iron and coal could be floated right up to the factory's own quay.


Within a short time, the Black Country became a place of brick-works, coal-mines and iron-works. Coal had been mined and iron worked in the district for centuries. Small, family run mines were common where the thirty-foot seam came close to the surface and 'Smethwick' means 'the town of the smiths.' There had always been back-yard nail and chain shops in Dudley, Oldbury and Cradley Heath. But these had been small-scale cottage-industries, worked as and when demand was there or when the work-shop owners felt like it. At other times, they tended their pigs, chickens or vegetable patch.
But the 'Revolution' meant more mines and deeper; more nail and chain shops, more foundries, more steel mills. There was a sudden steep increase in exploitation too. It was the kind of capitalist free-for-all that the Tories are itching to return us to, if they can only get rid of all that nannying red-tape from the EU: all that wimpy stuff about workers' rights and air and water purity.
There was none of that fuss-potting in the old Black Country. The Agricultural Revolution had forced people off the land:
'They hang the man and flog the woman
Who steals a goose from off the Common--
But leave the greater villain loose
Who steals the Common from the goose.'
People poured into the Black Country from surrounding English counties, from Wales and from Ireland. They came to a place where there were no laws against child labour: children worked in factories and were lowered into mines on the end of a rope, to spend all day down there, in the dark, to be hauled up again after dark had fallen. Many fell to their deaths or were brained by objects falling from above. There were no safety rules, no guards on machinery, no minimum wage, no welfare -- not even something as inadequate as Universal Credit.
Great mechanical hammers pounded day and night, 'wildfire' burst out above ground from ill-kept mines, and a dense dark cloud of smoke and soot obscured daylight. It's said that, at night, the red glow from the foundries and forges reflected off the underside of this cloud of smoke.
"The Devil stood on Dudley's keep
And far about Him gazed,
And said, 'I never more shall feel
At Hell's fierce flames amazed."
The old Black Country was Hell on earth for most.

It's the setting of my book, The Ghost Wife.
The book was partly inspired by the Dudley Devil. His real name was Theophilius Dunn and he was born in Netherton, a village near the town of Dudley, in 1790. He made a living as a witch, telling fortunes and 'finding things lost.' He was called 'Devil' because, like 'cunning man,' it  was a name for a witch. He was known locally as 'Owd Offie.'
He was supposed to have been such an accomplished witch that 'great personages' came in carriages from as far away as Scotland to consult him. Despite such claims, he seems to have been the usual con-artist, doing business at all the local 'Wakes' or fairs, from a tent decorated with occult symbols. He sold charms and potions.
Theophilius Dunn hanged himself in 1851, at the age of 61. One story has it that he foretold the day of his own death. When that day came, finding himself in good health, he was so annoyed at the thought that one of his predictions wouldn't come true, he made sure it did.

My devil comes to a sticky end too, though not by hanging and I'd like to make it clear that my devil, though inspired by Dunn, is not intended to be a portrait of him. My devil, Amadeus Warley, is far more wicked. And, of course, this being fiction, has genuine supernatural powers.

Another of the characters, Rattle, goes to visit the Devil and has to walk through the town of Dudley (called 'Dudham' in the book) through its streets of slum dwellings, where blood and guts were washed downhill from the market-place beneath the castle walls. The narrow streets were often blocked with refuse, including human waste. A din of hammers rings out on all sides. Dudley was a nailing town.

Rattle is a 'pit bonk wench' -- a girl who usually works on the pit banks, loading coal onto carts, or carting away waste earth and rock to the 'pit bonks.' In my childhood, if a girl or woman was untidy or grubby, they were accused of 'looking like a pit-bonk wench.' The chains of figures cut out of newspaper to amuse children were always called 'pit-bonk wenches.' That, or 'brickle wenches' who were very similar wenches who worked in brick yards.

The pit bonk wenches you did not mess with. They were muscular and they came mob-handed. Old photographs usually show them dressed in skirts, bonnets and big boots and grimy as anyone would be who worked loading coal all day. I think they'd dressed in their best for these photos, though, as the tales I was told as a child always described them as wearing an old flat cap that had once belonged to a male relative and often one of his old jackets too. Sometimes a shawl or sack was draped around the head and shoulders with the flat cap on top. And a pipe in the corner of the mouth.

I've never seen photos of them wearing trousers but they did. They often rode astride on the horses that pulled the carts and were climbing on and off carts all day. It was easier to wear trousers.

The Ghost Wife herself is not inspired by the Black Country at all. She stems from my reading of sinister Icelandic folk-tales about 'followers' -- a kind of ghost which attaches itself to a particular family and follows them relentlessly through generations. This is usually said to have happened because of a curse inflicted by a witch. The witch -- who was as often male as female -- created the ghost by murdering some luckless beggar and then sends the ghost against his or her enemy, to torment them or spy on them.

In the book a 'Methody' farming family had a rather less religious ancestor who drowned a beggar girl in order to create for himself a witch's familiar. The witch died -- but his familiar continues to haunt the farm-house and attaches herself to some unfortunate young man in every generation. As the Dudham Devil remarks, the classical writers would have called her a succubus. 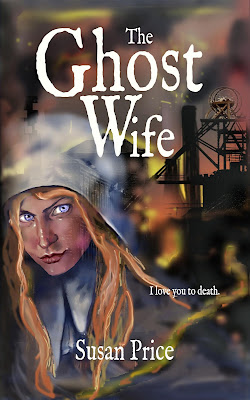